I was born in 1953 in Vichy to a French mother and an Italian father. It was my uncle Prosper Aubertin, himself an artist, who interested me very early in drawing and painting. 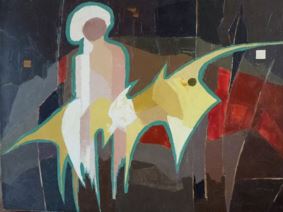 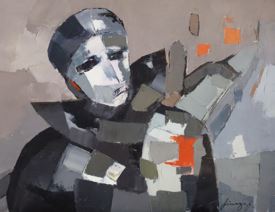 At the instigation of the sculptor André Tajana, whose student I was at the end of the 70’s, I started to simplify my drawings to go to the essence of a subject, sacrificing the superfluous to let only line, shadow and light. Then I turned to a cubist inspired painting, using acrylic paints, pastels and charcoals.

Immobilized several months by the ordeal of the disease, I wished to devote myself entirely to painting and to make it my professional activity.

Meeting with André and Simone Veillas in 1985 was decisive, I was influenced by the non-figurative style of André, by the work of quasi-mineral material and fantastically mastered that lives on his paintings. For years of chatting and strong views discussions, Simone and André brought me advice, criticism, encouragement and friendship. I work then in ranges of blue, gray, with well marked values. After getting closer to abstraction in the form of tachism and material effects, I decided to use the knife to work with oil painting.

I exhibit for the first time my paintings at the Salon des Arts Bourbonnais in Vichy which earned me the price of the General Council of the Allier. 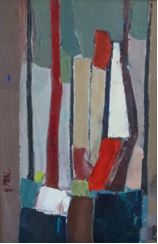 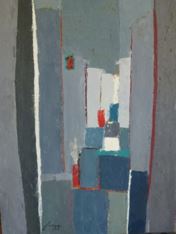 From the 90s, I gradually bring my paintings to a “contemporary” figuration style in which the material work remains vitally important.

Then follows a long series of exhibitions that lead me to the salons of Haute-Loire, Auvergne, Correze, Herault, and to the salon des Indépendants in Paris. At the same time, my paintings come to the University Gallery in Lyon and to the Galerie de la Bièvre in Paris. Galleries of Uzès, Moulins, Avignon, Antibes, Luxembourg, Venice, and Marbella exhibit my paintings.

In 2006, I organized the exhibition “Rites Bachiques et Artistes d’aujourd’hui” at the Souvigny Museum. The same year La Poste (National Postal services) publishes and sold a serie of envelopes illustrated by me on the theme of the world markets. 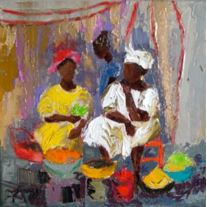 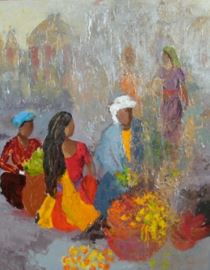 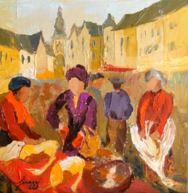 From 2010, my need for direct contact with the material led me to model statues of clay and wood. 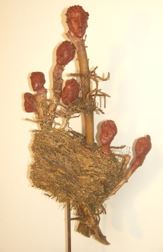 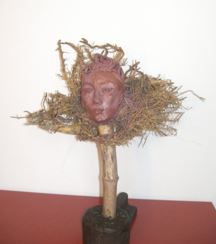 I build semi-figurative and abstract paintings. My abstract approach is related to the gesture and the material.

Inspired by the great masters of Action Painting: Riopelle, Kooning, Motherwell, Sam Francis, Pollock, I have a thirst for creativity, renewal addressed by mixed media, colors, dripping, semi-figurative or half-abstraction, oscillating from mineral to vegetal.

I exhibit my first semi-figurative paintings on which the human element is combined with the geometric volumes at the Galerie Christian Revzin at St Gilles Croix de Vie in 2011. 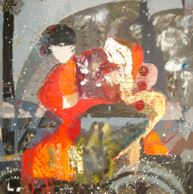 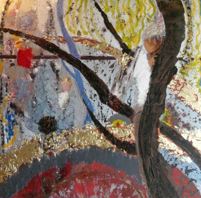 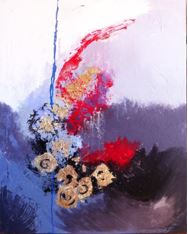 The abstract paintings are exhibited at the Society of French Poets in Paris in 2012. Material imposes its reign 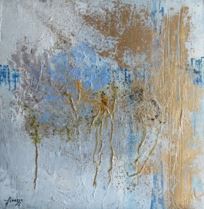 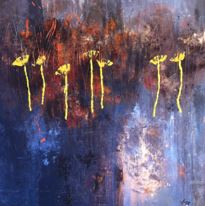 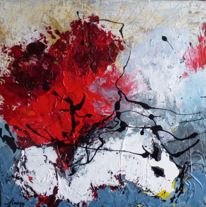 My work as a traveling painter was the result of travel impressions. On a journey, the glimpse of a situation or a place is caught, the sketches are drawn in haste and soon we think we will abandon all work to let ourselves be invaded by the charms of a country, a city, a noisy and joyful population, perfumes and colors are part of a vigilant memory. Often the eye cannot stop following, by imagining simplified, the contours of a face or a body to better render its deep nature, body movements are perceived as more lines to draw later on the canvas, the gesture of a child, an animal running, the play of shadows and lights, everything prints almost without my knowledge.

Back to the workshop, all these images are left behind, almost forgotten, the work goes on with other subjects, and exhibitions follow one another. One day everything follows very quickly, the drawing on the canvas drawn from several sketches: a character on one, trees on the other, fruit on another, another character … The sensations come back, the perfumes reappear to mingle with the smell of painting, the colors blend to find the ocher of a wall that for months accomplishes such a long journey on my path of painter, sounds long forgotten come to accompany this work of workshop between shadows and lights.

“An authentic artwork, a true artist

What is certain is that she looks, observes. Her curiosity is such that nothing escapes her and that’s all she sees which is transcribed by her talent on the canvas.

Beyond the pictorial narration, will be added its feminine and even feline sensibility. Warm, and sensual colors will be superimposed and create this atmosphere of its own.

Catherine Finazzi tells us, tells stories of what she likes in these trips that are indispensable to her to live and to paint. “

Semi figurative painting is a path from figurative to abstract, a step towards more freedom, an attempt to express my own spirituality.

The human element is combined with the geometric volumes, the verticals curl, undulate, evoking the relationship of man to the nature that surrounds him and his need to reconcile his human condition with his desire for elevation.

My canvases reflect my relationship to light, the letting go that allows the expression of incessant moves back and forth between inner world and outer environment in its broadest sense.

The “roots and clay” sculptures are born from the earth, the raw clay is modeled directly on the stem and the roots of dead plants torn from the ground.

I propose another life to the plant.

New deal for new life, roots up, roots in the air.

The earth no longer contains the root, it accompanies it by giving a face, sometimes a fragment of body to characters directly inspired by the shape of the root.

It emerges the components of a personal mythology related to the cycles of nature, forest, humus and clay.

Half gods born of the earth, and shaped by the human hand, their hair roots pulls them towards the sky, unifying the top and the bottom, they go sometimes alone sometimes grouped, according to their odd way. They were created with hope and jubilation.

Exhibiting my work, that’s offering a support to the dreams of those who look at it. It is soliciting their imagination, their memories, and their hopes. It’s an appeal to their personal light.